Share
Facebook Twitter LinkedIn Pinterest Email
The entire EFC team is delighted that the organization’s Bantamweight champion, Cameron Saaiman has earned himself a UFC contract in spectacular fashion last night by putting on the kind of performance we’ve come to expect from him in the Hexagon, this time in the UFC Apex Octagon. His stunning third-round knockout drew rare praise from UFC President Dana White who called Saaiman ‘The Future’.
EFC President Cairo Howarth backed-up that assumption: “We’ve always believed that Cameron is a global star for the future and he’s proven us right on the biggest stage in the sport. The path of past EFC champions to Vegas is a well-worn one and we know that many others in the future will continue to follow Camerons’ example for many years to come’ 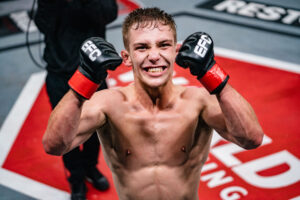 Saaimans ascendancy is good news for Zimbabwe’s Nicholas Hwende, who won the Interim Bantamweight Title at EFC 96 and is now a fully-minted Champion of the EFC’s 135lb division. The EFC also expects Hwende’s star to rise on a similar trajectory as he begins to show MMA fans across the world that the EFC breeds some of the best fighters competing on the planet today.
This article was originally published by Efcworldwide.com. Read the original article here.
Share. Facebook Twitter Pinterest LinkedIn Tumblr Email

Every Lightweight Champion in UFC History | May 2020

Islam Makhachev: Khabib ‘paid for everything’ leading up to win | UFC on ESPN 26